Opening of the Seneya Agro Industrie plant in Guinea

In Coyah, the Seneya Agro-Industrie (S.A.I) together with RIELA officially opened a new feed production plant. The hand-over of the keys was presided over by the Secretary General of the Ministry of Trade, Industry, Small and Medium Enterprises and Investment, Mrs. Aminata KOURUMA, who represented the Minister. Seneya Agro-Industry (S.A.I) now has one of the […]

Guinea – a new Milling and Mixing Plant is being installed

In the presence of our sales employee Siba Laurent Koropogui, Ing. Agronome in Guinea, another grinding and compound feed system is currently being installed. 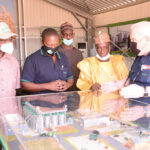 Opening of a Technology Center on Hadum Farm