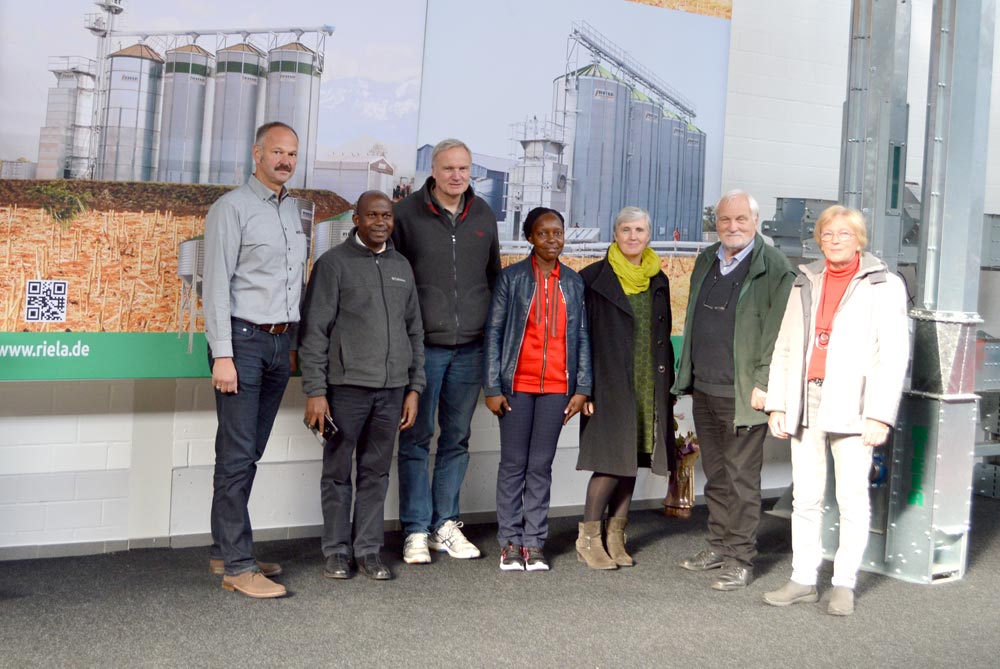 Mrs Luise Richard and Betty Namagala from Uganda at RIELA®

-vie- RIESENBECK. The Riesenbecker company RIELA® continues its efforts to open up new customer networks in the African market. Company owner Karl-Heinz Knoop now had Father Hilary Muheezangango (director of Caritas in the diocese Luweero in Kasana, Uganda) and Betty Namagala, project coordinator of Caritas in Kasana as guests. Knoop had met the delegation, which was accompanied by Hermann Schuten (International Rural Development Service) and the volunteer Luise Richard, the day before at an event of the Westphalian-Lippe Agricultural Association in Münster. Some time ago Luise Richard brought a maize sheller to Uganda, with which grain is separated from cobs, as a demonstration machine.

He wanted to convince the guests that he had the right solutions for the problems in Uganda, Knoop told our media house. These are solutions for drying, cleaning and conveyor technology, which have long since been replaced in German industrial agriculture, but which are well suited to Africa’s smallholder environment, says Knoop.

The problems reported by the guests are huge: there are actually few problems with planting, Muheezangango told our media house. Uganda is considered fertile, a granary also for neighbouring countries. Two harvests are possible. The problems start afterwards: During the drying of the grain, mainly maize, on the pavements, 60 percent of the crop yield is lost through pollution and rotting. The fact that, apparently due to climate changes, rainy and dry seasons are no longer reliable makes the situation more difficult. The quality is not good because it is not well managed, says Betty Namagala. Caritas in the region of Uganda, 70 kilometers from the capital Kampala, is active as a development aid agency. This, Luise Richard explains, takes place there “from bottom to top”, i.e. on the initiative of the small farmers. Caritas has taken up the cause of organising the farmers.

After guiding them through the production of the Riesenbecker Company, Knoop showed them possibilities for cleaning, drying and storing the harvest. Assembly is carried out on site in a scalable modular system. “In this way, we can add value there,” adds Knoop. The most important thing is to establish a service network on site, and not just to put up the plants.

Betty Namagala from Uganda and Luise Richard, who volunteers her time in development aid, inspect a maize sheller in which the grains are separated from the cobs. Karl-Heinz Knoop (I.) and Klaus Kunkemöller from RIELA® are watching their guests.